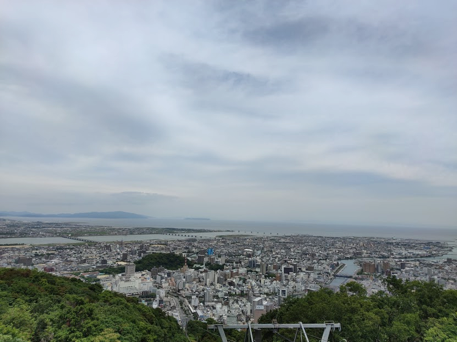 To get to Tokushima you can take a direct train to that takes about 1 hour and cost 2700yen. You can also choose to take the less expensive one, but takes 2 hours and cost 1400yen. Both trains are quite nice, and for me it didn’t matter that it took a bit longer, if I could get it cheaper.
The train ride over there is really nice and relaxing, with a lot of beautiful rice fields.

The Tokushima station is quite small, so you don’t need to worry about getting lost in there at all, which was really nice for me, since I am not used to big stations at all. When I was in Tokyo, I would keep getting lost, as the big stations in tokyo basically is like a small town in itself. 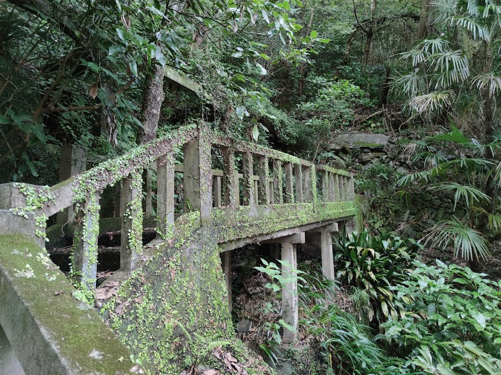 This is from a hike I made to the top of Mt. Bizan 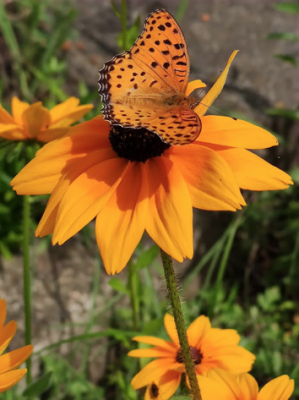 At the top of the mountain there were so many flowers. And with flowers comes butterflies. I was lucky to get this picture of a butterfly resting on a identical colored flower.

The hike up there takes about 30-40min, depending on what route you take, how fast you walk, etc. 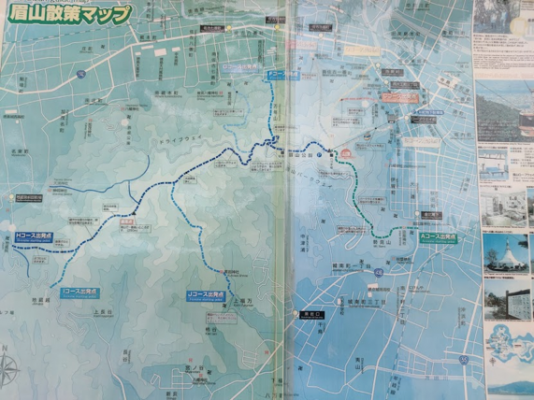 Here you can see some of the different routes. The picture is a little hard to see, and google maps only shows the route where you’ll be able to take a car.

It’s also possible to take a either drive up there or to take a lift up there, which costs 1200yen, both ways or 630yen one way. I took the lift up, and then I hiked down. Right beside building with the lift, you’ll be able to find a big red shrine, one of the routes start. This is the shortest route, but it’s also quite steep, so I would advise you to be careful if you take this route. I fell a few times, as it had rained the night before, so the ground was very soft and slippery.

Up there you’ll get a beautiful view of the whole of Tokushima.

The day I went it was a little cloudy, but nonetheless it was quite nice, as it allowed me to walk around and to hike down without dying of heat. 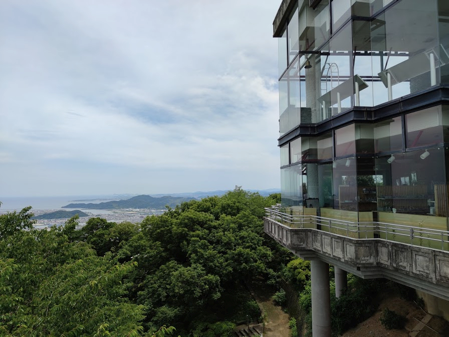 At the top there is a small park that you’ll be able to explore. There is also a small cafe, which sometimes host different events and campaigns.
When I was there, there was an event with demon slayer or kimetsu no yaiba, as it’s known in Japan. Sadly I didn’t get a picture of it, but they had a whole separate menu that was demon slayer themed.
I got their parfait, which was really delicious and totally worth the little high price (960yen)

Here the cafe can be seen. It as a gorgeous view. 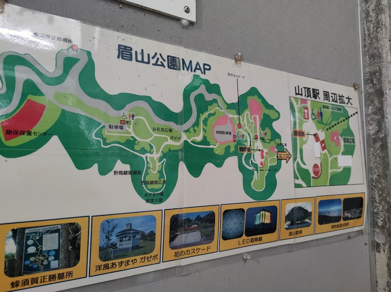 This is a map of the area. The pink spots are were there are a lot of Sakura. I have heard this place is so beautiful for sakura.

There is also Tokushima park, where you’ll see a lot of different activities. People use the park for everything. When I was there people were playing volleyball, taking dance classes, making dancing videos and riding their bikes. It’s a park bustling with life, and just walking through the park gives you a sense of what’s it’s like to live here. 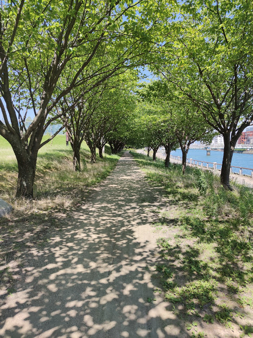 This is a road from the Tokushima park. The park is so green and with the many trees, it easy to find shadow to get out of the blazing sun. The park runs alongside a river, which you can be crossed by a small bridge.
There are also benches with cover, which makes it a perfect place for a picnic as well.
When I was here I loved going to this park after buying a bento and reading a book here.

Walking in this park reminded me of some of the parks we have in Denmark that I used to go to often. So for me it was a very nostalgic to wander around the park.